This product is discontinued please contact support to see if there is a replacement part available.

Small, highly functional ARM9 based Linux SOM (System On Module). Our goals when we designed the CFA-10036 were low cost, rugged, easy to embed, ease of use, and lots of GPIO.

The CFA10036 can easily monitor several environmental sensors (temperature, humidity, etc), log the data, and make that data available over the Internet. This is the core concept behind IoT (Internet of Things). Starting with a CFA10036 makes it very easy to make your thing part of the IoT.

Every tech geek who saw a prototype of the CFA-10036 quickly had an idea for a project that could use it. They wanted to use it in a test fixture, in another display design, in a motion control project, or in an automotive control project.

Our unofficial motto is “If it's worth doing, it's worth overdoing.” We ended up spending hundreds of hours updating our knowledge of high-speed PCB design, and designing and laying out the CFA-10036 to maximize the performance and minimize the cost. We think the result is beautiful. 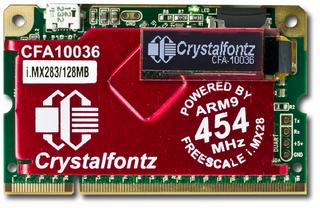 Product Update #10584: The Linux SOM family has had a kernel and a build update.

Product Update #10571: The CFA-10036 modules have been updated to include a heat shield to provide better thermal cooling for the i.MX28 processor.