What makes OLEDs useful for display construction is that they can be fabricated in bulk. For instance, to make a 256×64 display using normal, discrete LEDs, you would need to come up with a way to pack 16,384 LEDs into a small area. Using OLED fabrication techniques, all the diodes can be made at the same time, at a much lower cost.

OLED displays can be made in many colors, as shown below.

An Array of OLED colors from Crystalfontz.com

The light that is emitted is controlled by the proprietary mix of phosphors used in the construction of the OLED panel.

There are also RGB OLED displays, which use interlaced Red, Green and blue sub pixels to create a full-color display.

OLED vs LCD: Creating light vs Blocking It

OLED displays are an emissive display technology. Each dot that is illuminated on the display is creating a small, bright area of glowing phosphor. Contrast this with a backlit LCD, where the entire display area is always illuminated from behind.
Dark areas of the LCD are blocking light, light areas are allowing some light through. OLEDs can have lower power consumption than the equivalent backlit LCD, especially if the image displayed has only a few pixels lit.

For LCDs, an off pixel still passes some light, so the contrast ratio is a reasonable number. Since an off pixel for an OLED is completely dark, you are essentially dividing by zero, so the result is a very large number, approaching infinity. This is why you might see contrast ratios of 1000:1 or 2000:1 listed for an OLED.

OLED displays are typically thinner than a similar backlit LCD, although some modern backlit TFT modules are quite thin on their own, so an OLED’s thin construction may not be a huge improvement. 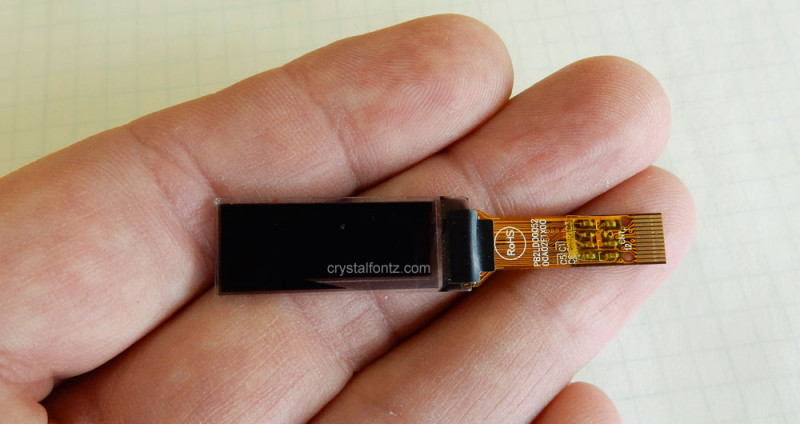 Some OLEDs displays are constructed so they can be used as a drop-in replacement for an equivalent LCD. These modules allow an existing design to easily be upgraded to a nicer-looking OLED display.

OLEDs can always be used in dark environments. Usually, there is software command or hardware setting that will allow OLEDs to be dimmed so that they do not blind an operator in very dark environments, such as in an automotive gauge cluster.

Some OLED displays are bright enough to be sunlight readable–these models will typically take more current and may have a shorter rated lifetime.

Crystalfontz carries a full line of OLED modules.  For assistance in determining what module is the best one for your application, please contact our knowledgeable and friendly support staff by email, phone, or chat. We are here to answer any questions that you may have about OLEDs and all available modules we carry.